Emotional detachment and physical fragmentation repeatedly occur across Gan Chin Lee's work. Subtle disturbances through first person perspective and multi panelled images punctuate his narrative sequences to become a collage of painterly sensibility and social observation. Negotiated by the artist's own personal experiences, his genre paintings reveal the frustrations and hopes of the contemporary Malaysian condition. The Road to Wawasan 2020 references the Malaysian dependence on migrant workers from all over the world to build the country's major development projects. With the artist observing the scene in the background, he comments that the path to Malaysian progress is ironically built by the hard work of others. - Eva McGovern


I was born and grew up in an environment of Kopitiam Culture.

Kedai Kopi Sugai Jarom was my grandfather most favorite shop, when he was young, his business brothers and multiracial friends always gathered here for tea, break fast and chit chatting. That time, television was not popular, they were here to exchange information of same line business, news of society and cultural, and this has made the Kopitiam (Traditional Coffee shop) part of my childhood memory under my grandpa's influence.

My hometown Jenjarom consists of mostly Chinese families and few Indian families. The other side of the next street is Sungai Jarom, a Malay Kampung (Malay village) with mostly Malay. Each race has their living custom and culture; this became my childhood natural background. Later on, I slowly understand that some historical factor cause today all races living individually.

Kedai Kopi Sungai Jarom was a communication platform for these two village people. Here, I can see those families from different races mix with each other naturally. It was a place to meet up with people, and to exchange and understand all kind of feeling from different people.

The history of Kedai Kopi Sungai Jarom may begin from the time when National Independence or even earlier. It is very sure that all uncles who were actively gathered here witnessed the important moment of National Independence, with joys and touch deeply felt from all of them. They were full of passion and positive toward all kind of future impossibilities for our baby born Malaysia.

It is truly Malaysia! We are deeply grateful with our ancestor wisdom for they have made the holy society contract which tolerates different voice and entity, not only under the principle fair to all races, and also to individual freedom and equality.

But today, for those elderly who can still recall the peaceful and prosperous situation when Malaysia just be Independent, they are just silent with disappointment, their hope for the country begins disappear.

Although they are still having meal in the Kopitiam, the doubtful and uncertainty feel exist in the atmosphere.  When doubts begin, we are toward separated from united. It affects the next generation, they become less dare to close to those from different races and be their friend.

Nowadays, new generation like to gather in coffee shop for the reason different with elderly last time. Under the situation as today, we have less freedom of speech, young generation prefer to have a drink at coffee shop at night, with friends of own race. They criticize current affairs; their negative emotion is spreading with no better guidance and release channel, it even affects the social cohesion of new generation.

A saying from Aesop Fables,“ United We Stand, Divided We fall”, specially dedicated this to all Malaysian for Malaysia her 54 years-Independence.

This painting focus on depiction a common phenomenon that happens within Malaysian Chinese teenagers. Throughout the representational  scene of “Yam Cha” (drink tea) culture, we may notice teenagers mystification towards their livelihood and prospect when living under a conservative environment which mainly dominated by partial policies.

The worst part is, this policy of containment is limiting teenagers’ growth in Malaysia today.

The conception of this self-portrait represents my sense of a nostalgic past and through this unique first perspective, I again sense doubt towards my own life.
After many years of getting along with my own, I still do not fully recognize myself. Most of the time, I can only see a clear picture of myself through reflections and photos… But which is the true me? Now I maybe understand that everybody is an isolated island, the state of my existence is lonely and it is not transferable no matter if it is verbally or handwritten.
So how do I proof my existence?
I think, therefore I am?
Maybe.
这幅自画像的构思在于妄想能以己视角，表达我对自己生命的臆想，和对青春的缅怀之状态。 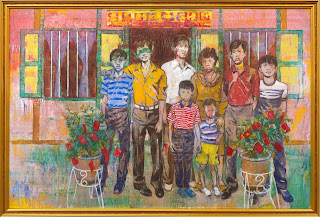 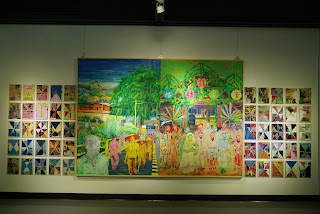